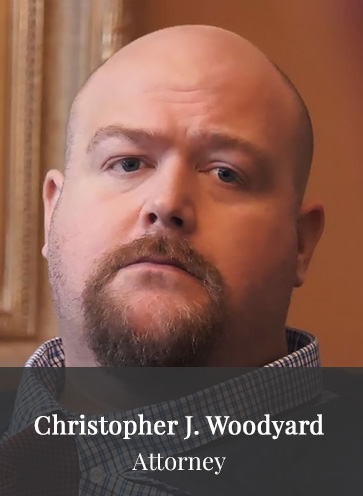 Christopher J. Woodyard is a Litigation Attorney at Roane Law in Greensboro, North Carolina. The firm represents plaintiffs injured in nursing home neglect and abuse cases, serious motor vehicle collisions, and incidents resulting in personal injury. Attorney Woodyard has represented North Carolina clients from the mountains to the coast and all areas in between. Chris completed his undergraduate studies at North Carolina State University before attending law school at the University of South Carolina School of Law, where he graduated with honors.

During his legal career, Chris has successfully tried jury trials to verdict in both North Carolina Superior and District courts. Prior to joining Roane Law, Chris was a law professor in Charlotte, North Carolina, where he taught Torts, Criminal Law, Criminal Procedure, Legal Ethics, and several specialty elective courses. For several years, Chris was a guest lecturer at the University of North Carolina – Chapel Hill, where he taught students from UNC’s School of Medicine, School of Pharmacy and School of Nursing about medical malpractice and the civil justice system.

Chris is married to Sheri Woodyard, also a practicing attorney, who has dedicated her legal career to serving the public through representation of State and local governments. They have a wonderful little girl, two dogs, and two moody cats.